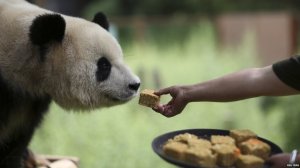 Today is Mid-Autumn Festival, a day of “intangible cultural heritage” in Mainland China.

The official harvest festival is celebrated all over eastern and southeastern parts of Asia. It falls on the the 15th day of the eighth month in the Chinese lunar calendar  during a full moon, which is in September or early October.

Apparently, the harvest festival originated in China during the Shang Dynasty, as early as 16th century B.C.E. It became popular during the Tang Dynasty in 600 C.E. Suffice it to say the activity has happened on the same date for thousands of years. Some of the characteristics of the festival include gathering together, giving thanks and praying for a bountiful future.

In our modern age, the Chinese take this time off as a national holiday to travel, be with family and attend public displays. The BBC published a great look at the festival at this link. Here’s our favorite photo.